“We are working with ‘open water’ in the northern upland chain LNP – mostly ponds etc, but sometimes larger lakes.  Ponds (and water) is a good one, we thought, because it is easy to target new habitat through working with farmers and the stewardship schemes. We are really pleased with Condatis.” A. Mansley, Northumberland National Park Authority 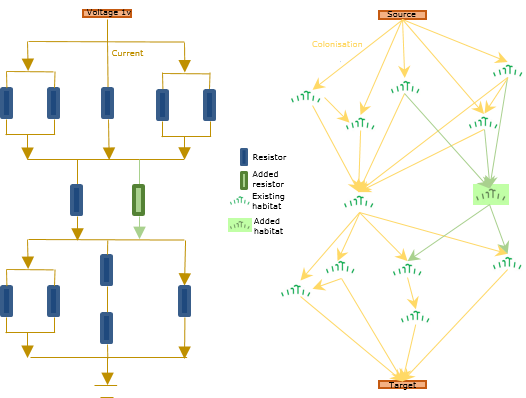 Electrical circuit on the left and comparable stylised habitat map on the right. Green represents adding a resistor or additional habitat to each to increase the number of pathways available and therefore improve the flow.

Condatis models a landscape of habitats as if it were an electrical circuit. A circuit board consists of a number of wires joining up resistors in combinations. When a voltage is applied to the board at one end, the current will pass through the board to the other end but the amount of current passing through each wire will vary according to the resistances it meets through each pathway. Condatis considers a landscape as analogous to a circuit board, with a source population of species being considered the voltage, the links between habitat useable by these species being the resistors, and the flow of species colonising the available habitat across those links being considered the current. A full description of the underlying scientific method  can be found in the following papers 2011 2012 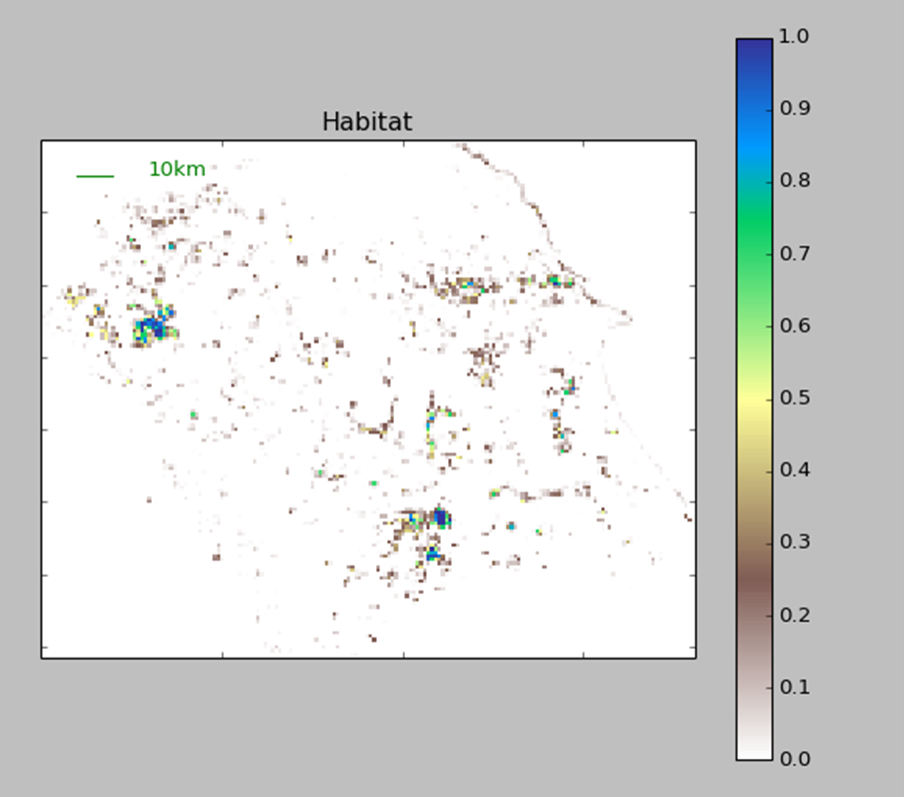 Using Condatis begins by opening a habitat map on which the conservation scenario will be based. The map can be produced from most GIS software: simply create a raster containing the habitat in the area of interest which is appropriate to the species  under consideration. The example shows the proportion of grassland habitat present per 1km square. Condatis can import geotiff or ESRI files.

Next, source and target locations are specified: the source either representing a nominal population of species or an actual population, the target representing an area for eventual colonisation. These can be selected using preset North South East West edges or bespoke sources and targets can be defined by a raster map. The direction of travel is defined by the placement of source and target and will depend on the purpose of study. For instance, if looking at likely species movement due to climate change, a south to north or lowland to upland direction might be required. Condatis looks at how the habitat in between the source and target could contribute to the species progress over multiple generations, so it is not designed to look in detail at individual patch-to-patch movements. 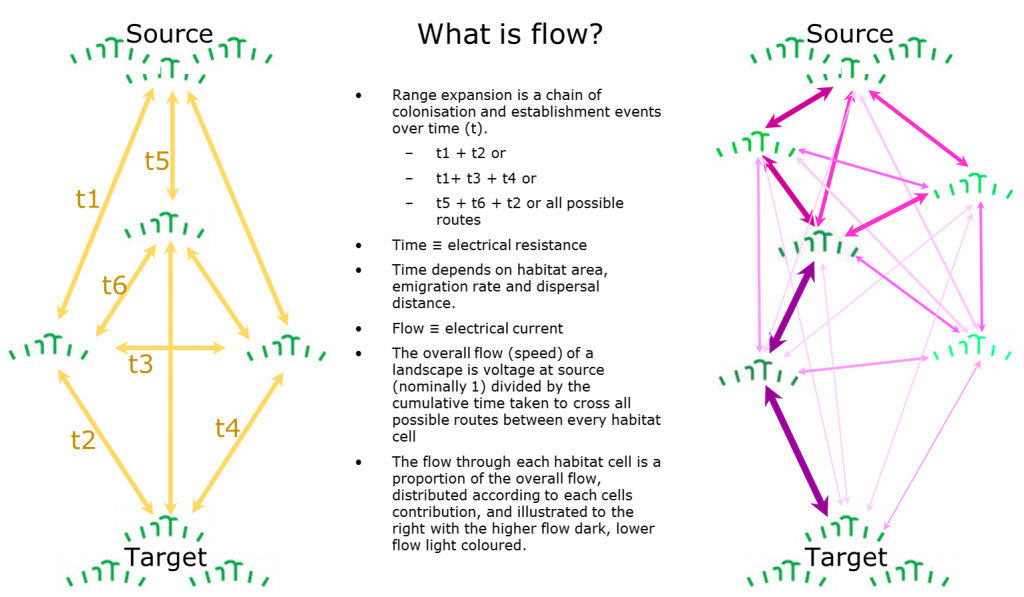 Flow of colonisation across the landscape from east to west, scale shows amount of flow through each habitat cell 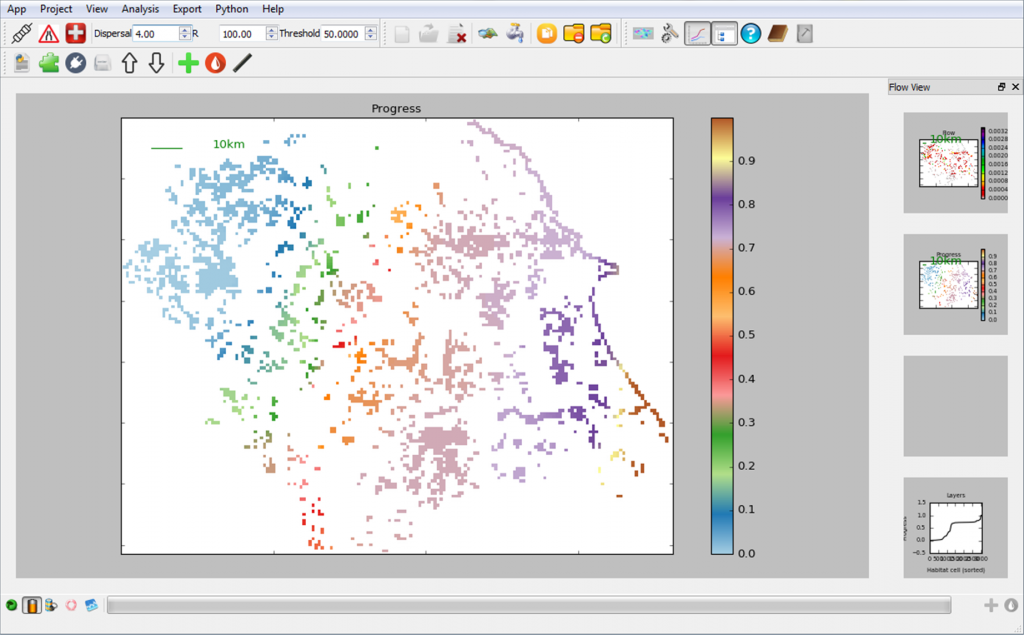 Each habitat cell is assumed to be linked with every other habitat cell; the strength of each of these links is dependent on the time it would take for the population of one cell to send colonists to populate the other cell. The time taken is considered analogous to resistance in the Condatis model. By selecting a dispersal distance (the average dispersal distance per generation) and the reproductive rate of a species (either known or representative), Condatis will calculate the overall flow from source to target and the portion of this flow travelling through each individual habitat cell. This is plotted on a map, colour coded to highlight the areas of most concentrated flow. Condatis also calculates the time it would take for the species to colonise the target (in number of generations) and the overall flow speed which is a measure of the connectivity of the landscape and is directly comparable across different scenarios and habitats.

The flow output also produces a chart showing the progress of colonisation which can be used to identify areas where progress is slow (narrow bands), and an isolated areas chart which shows the seven biggest jumps colonising species have to make. These can roughly indicate where habitat creation would improve connectivity. 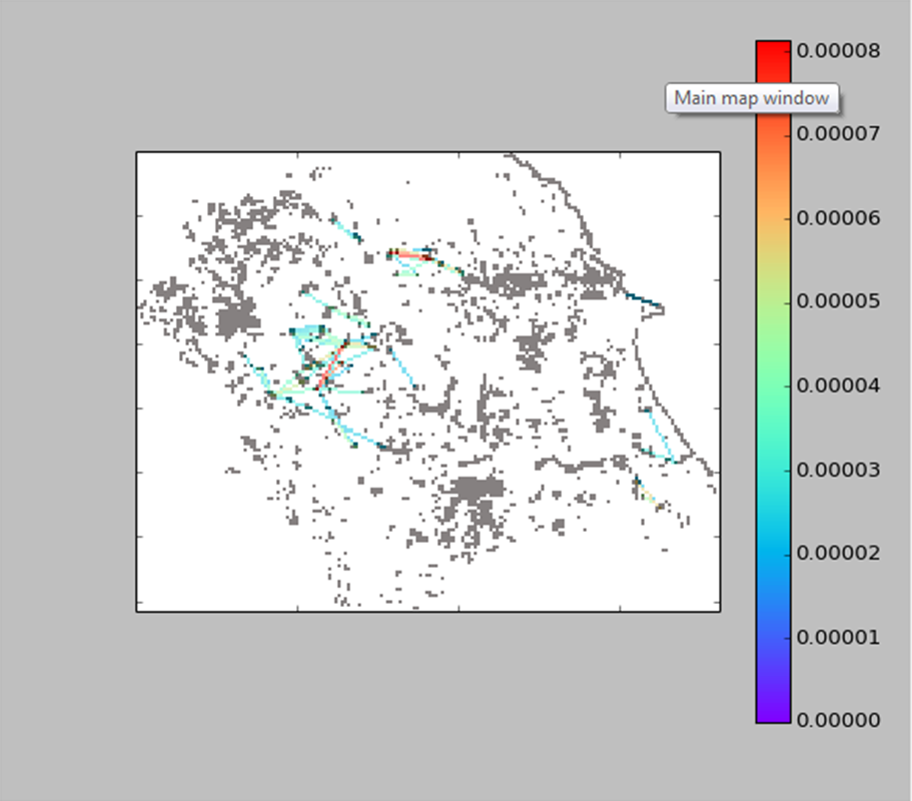 Condatis measures the amount of flow through each cell and the distance travelled across its links to other habitat cells. It uses this to calculate the power of each cell link, which we like to think of as the strain that each link is under. By ranking these it can produce a map showing these links of highest strain, which are “bottlenecks” in the landscape where a high proportion of the species flow is travelling through relatively few links. 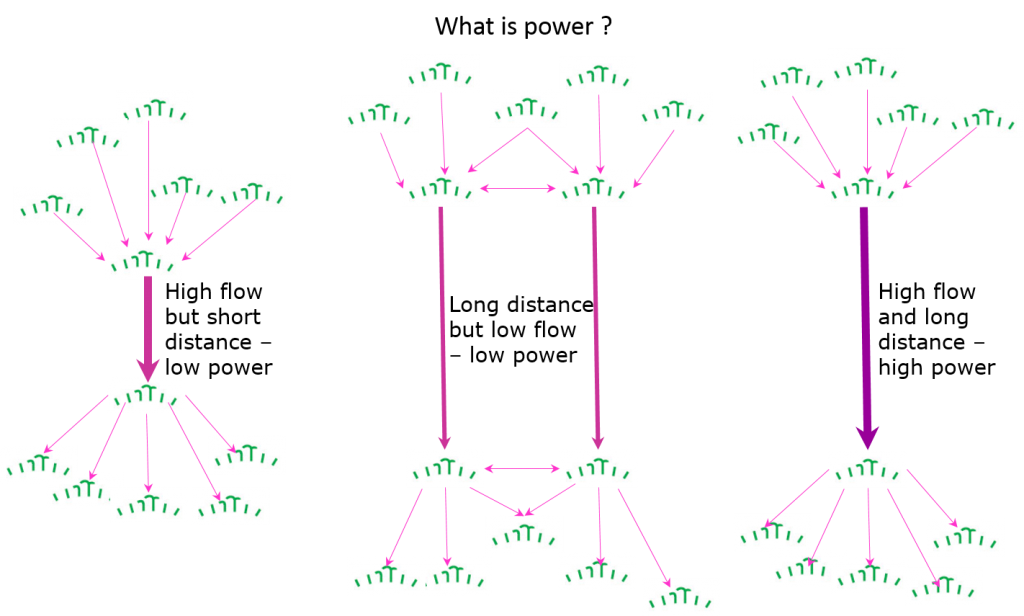 Condatis also produces graphs showing how the power, or strain, is distributed over the overall number of links. This will often show that a small number of links carry a disproportionately high amount of power. (The threshold on the bottlenecks map can be adjusted to highlight these.) This gives an indication of where habitat could be created to relieve bottlenecks and increase range-shifting connectivity. 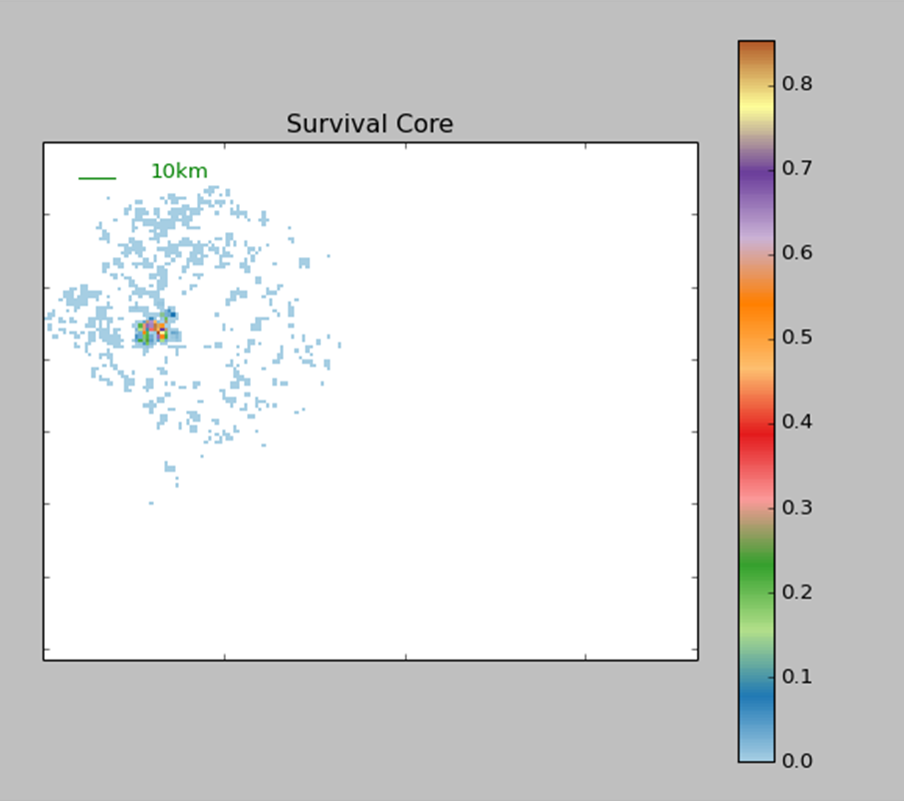 Metapopulation survival core showing habitat cells contributing to the survivability of the most endangered species, ranked according to largest impact

The calculations for flow and colonisation effectively ignore the possibility of patches going extinct once initially colonised, so it is important to consider whether the entire landscape could support a viable metapopulation.

Condatis calculates the resistance to extinction (Metapopulation capacity) for species which could only just survive due to low fecundity or high extinction rate in the landscape; this is based on the spatial arrangements of habitat. It will produce this as a map showing the areas of most likely survival, and also generates a map showing cells where creating or increasing the amount of habitat will potentially improve the survivability of the most vulnerable species again ranked according to greatest impact.

Where to create habitat? 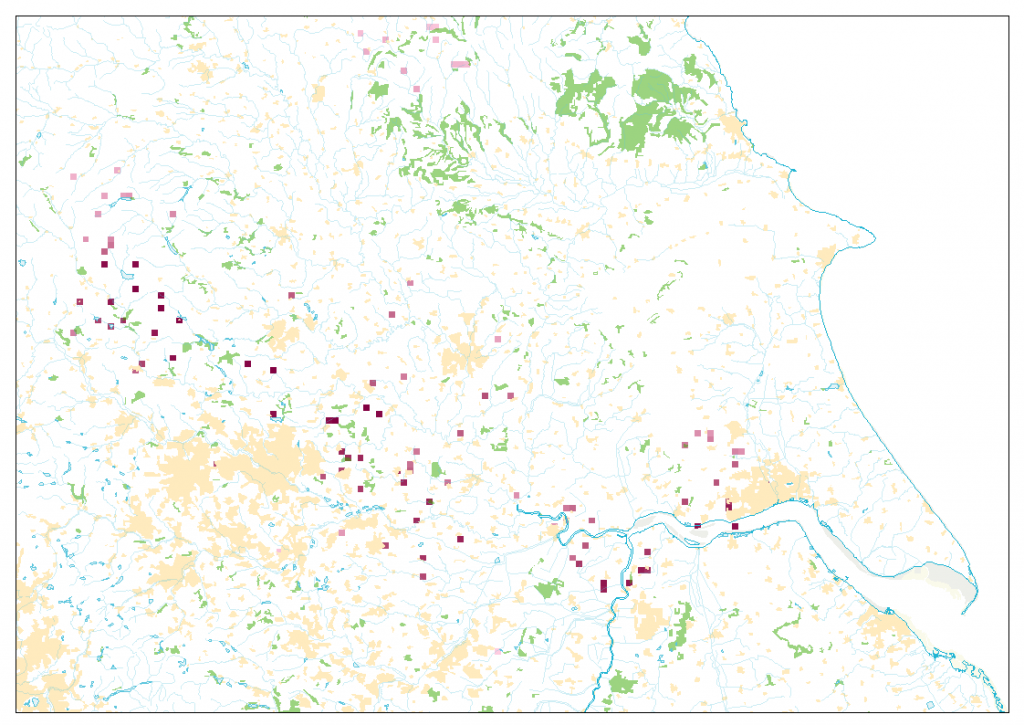 Condatis has an Adding plugin which allows habitat cells to be added precisely, to test their impact on connectivity. So once you have identified potential areas using the flow, progress and bottleneck maps it’s easy to draw in a single cell or a cluster of cells in a variety of patterns or import a raster of proposed locations and see quickly how these impact on the the speed of colonisation and the time taken to reach the target. Each cell created is tested to see the improvement in flow speed it contributes.

It also has a plugin called Dropping, a process which allows the import of a map of proposed restoration sites (useful when the available locations for potential sites are limited) which are then tested in turn and ranked in order of their impact on connectivity. This can also be filtered to show that often a relatively small number of potential restoration sites make the largest contribution to the landscape flow and allows prioritisation of increasingly scarce resources into sites likely to have the greatest impact on connectivity and which are also realistic targets for habitat creation. 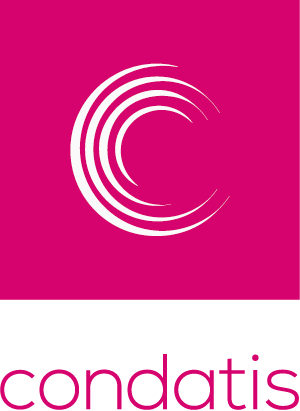 Is this the right software for me?

Condatis is a highly flexible and very powerful tool designed for landscape scale studies of connectivity over successive generations of species. It works particularly well for habitats that are well-defined and patchy. However, if the area of interest is likely to be very small (roughly the distance required to colonise habitat within one generation of a target species) then Condatis is unlikely to produce results that will be meaningful. If however you are looking for a quick and easy to use application to look at directional connectivity over a landscape, pick out the most effective sites for habitat creation, test climate change resilience or run a number of directly comparable colonisation scenarios then we would recommend trying Condatis.

Condatis is a user-friendly, open source program, which is available to anyone.

To find out who is behind Condatis click here